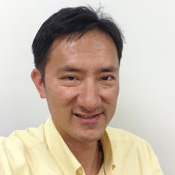 Born in Tokyo, moved to California at the age of three. Graduated from a public high school in Los Angeles,originally planned on studying Physics at UC Berkeley, but instead went to Keio University, Tokyo, to study Economics.After experiencing legal and tax issues at Keidanren(Japan Federation of Economic Organizations), moved back to Los Angeles to enter Nagano Morita CPA's, which his father co-founded. He and his wife and three children live in Torrance, California.